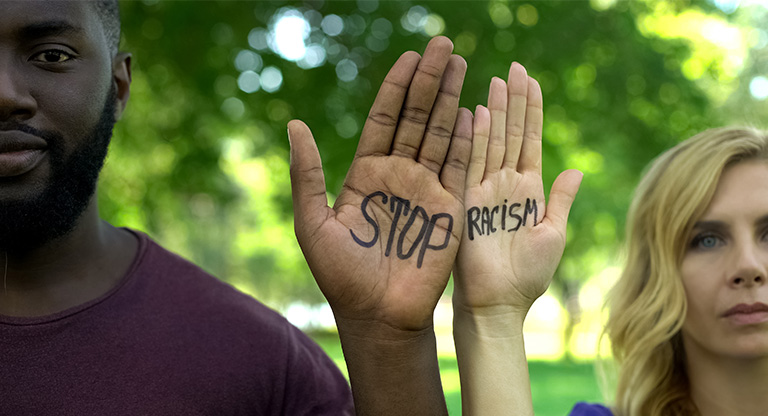 When I was in high school my friends and I went to a party. We were promised sleeping accommodations and it didn’t quite work out that way. So, we took to the streets and were guided to a house under construction. All of us were either white or passed as white and the neighborhood was white. We slept in the house in cardboard boxes. The next morning we got up bright and early and were back to walking through the neighborhood. No one called the police. Neighbors drove by us and asked us if we needed a ride!

On another occasion, in high school, another party, again, sleeping accommodations didn’t work out. But this time we had a van which became our sleeping accommodation. Around 4 am we were woken up by the police. They simply asked us to move the van since we parked it in a restricted area.

I know this is not everyone’s experience who is white. You might be white and have had the cops called on you or even been arrested for having some innocent fun.

I don’t have the fear that I will be arrested or killed when I am stopped by the cops like George Floyd was killed and many, many others before and after him.  As a matter of fact, I don’t have to think twice about many of my actions the way people of color do.

Today I don’t want to talk about what white privilege is or try to convince you that it is real. What I want to do is to talk about how you can use your privilege to advocate for people of color, and especially people who are black.

My friend, Dr. Tolonda Tolbert and her fellow founders of Eskalera, a company focused on diversity and inclusion, shared an open letter that I’d like to read to help put things into perspective.  Here it goes. We stand together in solidarity with the Black community – our employees, customers, and partners – in the fight for a world free of prejudice, racism, inequality, and injustice.

The pain, anger, grieving, and exhaustion are the result of underlying injustices endured for 400 years by generations of Black men, women and children. Although we are not all directly responsible, we are all individually accountable for the society we have. And, we are each responsible for driving the change we want to see. While we all share in this responsibility, true, lasting change only comes from the majority exerting their influence and power. Silence and indifference remain our greatest obstacles to freedom, equality and justice.

Today, more than ever, we encourage everyone to lean into the discomfort of doing the uncomfortable, act out of responsibility, not guilt, and be part of the solution.

This message is clear. If you are white, people of color don’t need or want what’s called “white guilt”.  We are well beyond that. People of color need allyship, advocacy and action from all people.

As a person who is half white and half Latin I’d like to offer some ideas.  First, do your own homework. Learn about racism, implicit bias and the history of systemic racism. Get the answer to the question of “how did we get here?” As the statement from Eskalera points out, while you personally did not create the system, you are living in the system. So the primary goal for white people working to understand racism is not only to learn how racism impacts people of color. The primary goal is to recognize how the system of racism shapes our lives, how we uphold that system, and how we might interrupt it.

If you are white, there is a higher possibility that you don’t talk about race at the dinner table, with your friends or with people of color. I encourage all of us to join what can be uncomfortable conversations. And we need to show up with humility and vulnerability when talking about race. One way of doing this is by using openers to difficult conversations that demonstrate that humility. This comes from Robin Diangelo and Anika Nailah if you want to learn more. For example, you may open by saying… I’m really nervous/scared/uncomfortable to say this…and/but… .  From my experience/perspective as white man, white woman, mother, daughter I wonder… I’m afraid I may offend someone, and please let me know if I do, but…  It feels risky to say this and/but…  I’m not sure if this will make any sense, and/but…

Now I want to turn your attention to a couple things we shouldn’t do. While showing humility and vulnerability are important, we need to be careful about how white guilt shows up. People don’t want your sympathy or tears. People who have experienced and have seen racism for years are outraged. You and we should be outraged too. So actions speak louder than words. Take action. Do something.

Finally, have dialogues about racism with people of color, but be careful not to burden them with having to educate you too. I’m not saying don’t ask questions or don’t have dialogue. But just know that racism is something people of color experience day in and day out. It takes an emotional, financial, and physical toll. And their role is not to satisfy your intellectual curiosity.

I’m bringing this forward as a diversity and inclusion practitioner who is hopeful that we will make progress on racism. I am not perfect by any means. I have made many mistakes when it comes to race and will make mistakes in the future. However, one thing I know is that we won’t make progress unless white people are engaged. You are needed and can make a difference.